Tour through the old town

2 History Stele
The contemporary monument and artwork by the sculptor Klaus Ringwald depicts striking relief artwork of the city’s history from three angles: the city’s founder St Fridolin, the centuries-old and modern bath culture in the city and of course the love story by the poet Joseph Victor von Scheffel about the Trumpeter of Säckingen.

3 Gallus Tower
The tower with its mighty walls was erected as a defensive structure and protective wall against the Rhine flooding after a terrible flood in 1343. Today it is the guild pub as well as the venue of the long-standing Säckingen Guild of Jesters and thus unquestionably a ‘Bulwark against Gloom’.

4 House of the Fishermen’s Guild
The listed building dates back to 1717 and is one of the oldest houses in Bad Säckingen. Owned by the city of Bad Säckingen it houses a museum and serves as an exhibition venue for artists and events of all kinds to promote culture and the city’s history.

Minster Square
The grand church building of Fridolin’s Minster is situated here. This is where the romantic love story of the Trumpeter of Säckingen and the noble Margaretha von Schönau began. Numerous dining options line the square and invite visitors to linger, offering them a view of the minster. The most prominent building on the square is the restaurant Fuchshöhle (Fox’s Den). The building dates back to the 16th century, the façade artwork was created in 1904 and presents motives from the Scheffel era. The minster square not only hosts the weekly market but also several festivals and events throughout the year.
Recommendation: Have a seat at one of the many restaurants on the minster square. Watch the colourful hustle and bustle with the stunning backdrop of Fridolin’s Minster and the surrounding buildings.

5 Fridolin’s Minster
The impressive church building constructed in the Baroque style with towers which can be seen from a great distance, reflects the size and significance of the former abbey and women’s convent, which led to the founding of the city. The silver Fridolin’s Shrine is a masterpiece of extraordinary rank and dates back to 1764. Those who visit the treasure chamber of the Minster of St Fridolin gain an impression of the great and extensive influence the former abbey with its princess abbesses and canonesses from various noble families had.
Recommendation: Visit the silver shrine of the holy St Fridolin and take a tour of the old walls of the minster. This will allow you to not only visit the crypt, which the public does not usually have access to, but you can also climb the towers of the minster.

6 Trumpeter of Säckingen’s Tomb
Franz Werner Kirchhofer (1633 – 1690), citizen and city council member and Maria Ursula von Schönau (1632 – 1691), daughter of the Baron Otto Rudolph von Schönau are the historical lovers in the story ‘Trumpeter of Säckingen’. On the outer façade of the minster a relief bust of Scheffel and the lovers can be found in an alcove. This tomb was the original inspiration behind the romantic poetry.

7 Old CourtyardAt one time, the Old Courtyard between Fridolin’s Minster and the Rhine was a building that belonged to the abbey premises and was situated around the minster. It served as the abbesses’ residence up into the 16th century. Its Renaissance design, particularly the typical façade paintings can once again be marvelled at in their original form after extensive renovation work.

9 Palais Landenberg Town Hall
The building was constructed as the Palais Landenberg by Baron Eusebius Franz Sales von Landenberg at the beginning of the 19th century and was remodelled to serve as a school and town hall around 1850. Today the city administration of Bad Säckingen is located here.

10 Abbey Building
The late Gothic building was commissioned by the princess abbess and was constructed from 1565-1575. Once the Abbey was dissolved in 1806, it became the seat of the Grand Ducal district office. The administrative district office of Säckingen followed from 1936-1972. Since 1974, the road construction office has been located here.

Rheinbrückstraße
Popular shopping street in the historic city centre of Bad Säckingen with numerous small and fine owner-run shops and charming cafés.
Recommendation: you will find a Hiddigeigei verse on house fronts or a cat sculpture here and there throughout the historic city centre. There is even a restaurant with the name ‘Hotel Kater Hiddigeigei’ close to the castle park, the philosophical place of the famous city’s tomcat.

11 Rococo House
The house with stucco art and a Madonna depiction dates back to the 18th century.

12 Hallwyl Court/Scheffel House
The Teutonic Knights’ house, known today as the ‘Hallwyl Court’ can be found at the end of the Rheinbrücken Street situated in front of the entrance to the wooden bridge. This is where the poet Joseph Victor von Scheffel lived from 1850-1851.

13 Wooden Bridge
The bridge across the Rhine river which leads to the Swiss twin town Stein is over 400 years old. Stretching over 200m it is the longest roofed wooden bridge in Europe. The bridge constructor Blasius Baldischwiler created the bridge which is still in good condition today between 1785 and 1803. The bridge was destroyed several times in wars, by ice drifts or floods and then re-constructed again. By the way: during the war years, supplies were secretly transported across the bridge from Switzerland to Germany; and silent agreements and arrangements were made here. That is how the bridge became what it symbolizes today: it unites people – even after hundreds of years.
Take the passenger ship ‘Trumpeter of Säckingen’ down the Rhine and enjoy the view of the city, the wooden bridge across the river and our wonderful landscape from this perspective.

14 Diebsturm (Thief’s Tower)
The Diebsturm is a round and seemingly delicate tower and was once a part of the city wall of Bad Säckingen. In the 17th century it was integrated into the complex of Castle Schönau. In 1864 the Säckingen industrialist Theodor Bally had the Diebsturm re-modelled in the neo-Gothic style. Since 2005 the romantic tower has been in use as a venue for civil wedding ceremonies and cocktail receptions.
Recommendation: Enjoy the most beautiful view of the Rhine and of one of the city’s landmarks.

15 Teahouse
The Teahouse in the castle park with it ceiling frescoes by Francesco Antonio Giorgioli was constructed in 1720 in the Baroque style as part of the Schönau castle complex. Today a very popular café can be found here.

16 Au Cemetery
The listed cemetery served as the people of Säckingen’s final resting place from 1815 until it was closed in 1958. Among those resting here are prominent local personalities of the 19th and 20th centuries.

17 Trumpeter Statue
The trumpeter statue created by the sculptor Heinrich Ruff in 1867 and located on the exterior stairway of the Castle Schönau was dismantled and restored. The figure unfortunately could no longer be placed outside and now has a new home inside the castle. A new trumpeter has been erected in its place.

18  Scheffel Bust
The bronze bust of the poet and honorary citizen of the city of Säckingen, Joseph Victor von Scheffel, with a larger-than-life trumpeter figure on the steps of the base, was inaugurated in 1901. During the war the trumpeter had to be melted down as a metal donation in 1941 and the bust was moved to the castle park.

19  Castle Schönau
The castle is surrounded by idyllic park grounds along the banks of the Rhine and was constructed in the 17th century in place of a moated castle by the lords of Schönau. A concert shell for open air performances and concerts is located on the west side of the castle. The castle itself houses the Scheffel rooms, the trumpet museum as well as museums for pre- and early history as well as about the city’s history.

20 Jester’s Fountain
The Jester’s Fountain in the Rheinbrück Street which was created from Jurassic limestone by the Rheinfeld sculptor Leonard Eder in 1972, depicts the figures of the Bad Säckingen carnival: the ‘Roman’, the ‘Little Man Wasting Away’, the ‘Maisenhardt Jester’, and the ‘Hüüler’.
Recommendation: Follow the city guidebook in the Steinbrück Street all the way to the bridge fragment made from red granite. It is a reminder of a stone bridge which still exists in the ground below the street today. (In 1830, the right branch was filled and permanently changed the cityscape.) The ‘Tomcat depiction with mice’ by the sculptor Leonhard Eder as well as a trumpet figure in a roof façade can also be found on the Steinbrück Street.

Situated on the High Rhine and surrounded by the heights of the Swiss Jura and the Black Forest you’ll find the former island city of Bad Säckingen. Enjoy a 1.5 hour walk with our competent city guides through the romantic old town with its enchanting alleys. Marvel at the baroque splendour of St. Fridolin's Minster with its unique silver shrine of the city's patron saint Fridolin. Wander over the longest covered wooden bridge in Europe. Did you know that it is depicted on a special stamp issued by the German and Swiss postal services?

Our city guides will show and explain the most important sights in a 1.5-hour tour. Afterwards, take some time for our beautiful city and enjoy the southern flair of the square in front of the St. Fridolin’s Minster with a refreshing drink. 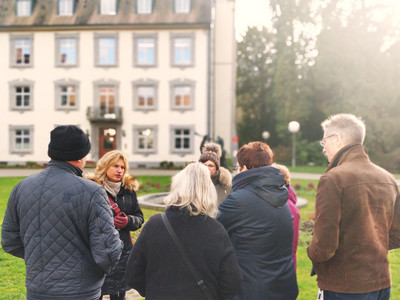 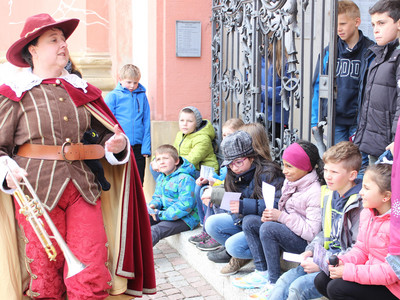 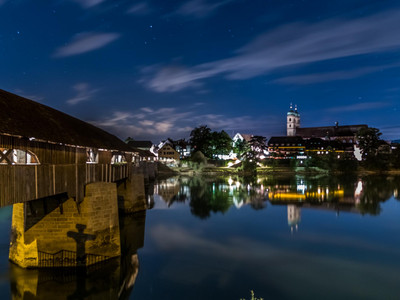 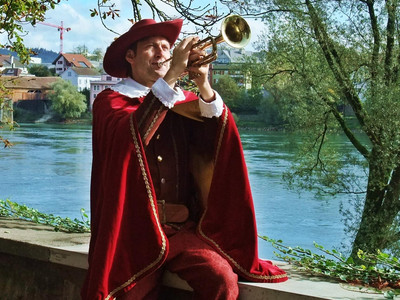